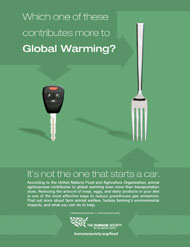 Do you drive a Prius to Ruth’s Chris or a Hummer to the Tofu Shack?   …Meat and the Environment.

In November, the United Nations Food and Agriculture Organization issued a report stating that the livestock business generates more greenhouse gas emissions than all forms of transportation combined.

When that report came out, People for the Ethical Treatment of Animals and other groups expected their environmental counterparts to immediately hop on the “Go Veggie!” bandwagon, but that did not happen. “Environmentalists are still pointing their fingers at Hummers and S.U.V.’s when they should be pointing at the dinner plate,” said Matt A. Prescott, manager of vegan campaigns for PETA.

So the animal rights groups are mobilizing on their own. PETA is outfitting a Hummer with a driver in a chicken suit and a vinyl banner proclaiming meat as the top cause of global warming. It will send the vehicle to the start of the climate forum the White House is sponsoring in Washington on Sept. 27, “and to headquarters of environmental groups, if they don’t start shaping up,” Mr. Prescott warned.

He said that PETA had written to more than 700 environmental groups, asking them to promote vegetarianism, and that it would soon distribute leaflets that highlight the impact of eating meat on global warming.

“You just cannot be a meat-eating environmentalist,” said Mr. Prescott, whose group also plans to send billboard-toting trucks to the Colorado Convention Center in Denver when Mr. Gore lectures there on Oct. 2. The billboards will feature a cartoon image of Mr. Gore eating a drumstick next to the tagline: “Too Chicken to Go Vegetarian? Meat Is the No. 1 Cause of Global Warming.”

The Humane Society of the United States has taken up the issue as well, running ads in environmental magazines that show a car key and a fork. “Which one of these contributes more to global warming?” the ads ask. They answer the question with “It’s not the one that starts a car,” and go on to cite the United Nations report as proof.

On its Web page and in its literature, the Humane Society has also been highlighting other scientific studies — notably, one that recently came out of the University of Chicago — that, in essence, show that “switching to a plant-based diet does more to curb global warming than switching from an S.U.V. to a Camry,” said Paul Shapiro, senior director of the factory farming campaign for the Humane Society.

The society, Mr. Shapiro said, is not only concerned with what happens to domesticated animals, but also with preventing the carnage that global warming could cause to polar bears, seals and other wildlife. “Our mission is to protect animals, and global warming has become an animal welfare issue,” he said.

Even tiny pro-veggie operations are starting to squeeze dollars out of their shoestring budgets to advertise the eating meat/global warming connection. Vegan Outreach, a 14-year-old group in Tucson with just three full-time workers and a $500,000 annual budget, is spending about $800 this month to run ads and links to its Web page on about 10 blogs. And, it will give more prominence to the global warming aspect of vegetarianism in the next batch of leaflets it orders.

“We know that vegetarian organizations have sometimes made exaggerated health and environmental claims, but that U.N. report is an impartial, unimpeachable source of statements we can quote,” said Matt Ball, executive director of Vegan Outreach.

Like Mr. Prescott, Mr. Ball is incensed that high-profile people like Al Gore — or environmental groups with deeper pockets than his — have not stepped up to the plate.

“Al Gore calls global warming an existential risk to humanity, yet it hasn’t prompted him to change his diet or even mention vegetarianism,” he complained. “And I guess the environmentalists recognize that it’s a lot easier to ask people to put in a fluorescent light bulb than to learn to cook with tofu.”